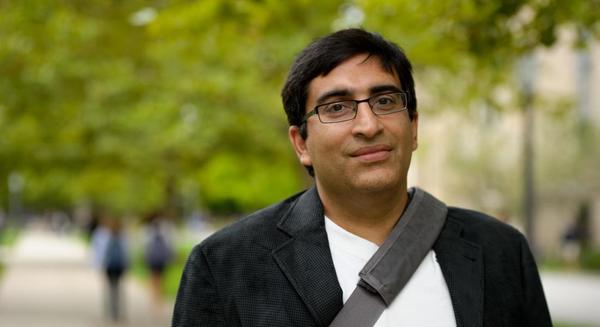 At first glance, many of the children at a nutrition treatment center in São Paolo look anything but hungry.

Most, in fact, are overweight. But they’re also malnourished – a troubling sign, experts say, of Brazil’s move from a traditional diet heavy on rice, beans, protein, fruits, and vegetables to one dominated by fast and processed food.

A Kellogg Institute faculty fellow and visiting guest scholar from Brazil are now combining technology, psychology, and the social sciences in an effort to combat child malnutrition in the South American country.

“Even if we only help a small percentage of these children, that will have a ripple effect,” said Nitesh Chawla, director of the Interdisciplinary Center for Network Science & Applications (iCeNSA) at the University of Notre Dame. “Behaviors, attitudes and beliefs spread through a network, and if we can slowly work on these things, it becomes a sustainable change.”

The change in Brazil’s diet has, as in other developing countries, mirrored its economic growth. But despite that growth, massive inequality and areas of deep poverty still remain, contributing to a lack of access to food and stunted growth among some children.

Those problems are compounded by urban crowding in a nation where some 85 percent of residents live in cities.

“We don’t have space to exercise. We don’t have physical activity,” said Gisela Solymos, a guest scholar at the Kellogg Institute for International Studies and the Visiting Melchor Professor of Computer Science and Engineering. “Parents are scared to let their children go out and play because of the extremely high crime rate in the slums.”

Solymos is the former director of the Centre for Nutritional Recovery and Education (CREN), a nonprofit that treats child malnourishment in some of São Paolo’s poorest neighborhoods.

She and Chawla are partnering to develop a system that assesses a child’s nutritional and wellness risk profile and provides a personalized intervention and wellness plan – something they hope can be replicated worldwide.

“We want to be able to personalize nutrition and a child’s health, but focusing on the local context,” said Chawla, the Frank M. Freimann Professor of Computer Science and Engineering. “The idea here is simple: we want to provide the mechanism for care providers who are engaging with these groups by giving them a personalized line of inquiry and intervention that helps them contextualize the socio-ecological model around a child.”

Under their plan, data from the child’s electronic medical records will be sent securely to a “Knowledge Hub” for modeling and analysis using machine learning and artificial intelligence. Responses to questions about the child’s family, lifestyle, community, and environment will also be included.

The Hub will then generate a risk profile that supports caregivers  as they tailor a treatment plan that responds to the child’s physical, socioeconomic, and psychological needs. Chawla emphasized that the Hub will be built on principles of trust, fairness, and transparency.

The project combines Solymos’ background in psychology with Chawla’s focus on artificial intelligence, machine learning, and the impact of technological innovations on society. It’s based on the idea that malnutrition, in many countries, is often caused not only by a lack of accessibility to healthy food, but also by social and psychological features unique to each child.

They, along with iCeNSA PhD student Keith Feldman, are studying the relationship between health and what they call the “human factor” – how things like depression, parental engagement, or family stress interact and contribute to malnourishment. Their research shows they are strongly intertwined.

For instance, addressing a child’s loneliness correlates with a decrease in obesity. But if a child also suffers from anxiety, improvement is unlikely.

“It’s like a three-dimensional structure where things correlate among each other,” Solymos said. “What surprises me is we have been able to see this using analytical tools. It’s amazing.”

Meanwhile, children and their families may face underlying problems seemingly unrelated to hunger that need to be addressed before nutrition can be improved.

Solymos recounted the story of a mother with five children, one of whom was extremely malnourished, living in a single room with no bathroom. Their hygiene suffered because they were embarrassed to ask to use a neighbor’s restroom.

“We could not do anything with this child before we were able to find a very small amount of money to build a bathroom,” she said. “Humiliation was a very important issue and had to be addressed very concretely.”

The three will publish a paper later this year that will be the first of its kind, identifying a “significant, almost causal relationship” between psychological markers and clinical outcomes related to child malnutrition.

They also plan to develop an app to assist caseworkers as they collect data. They hope to expand the project, which is being piloted at CREN, to another nonprofit within Brazil and eventually take it globally.

The project is funded by Kellogg, iCeNSA, and the Department of Computer Science and Engineering. The Global Academy Foundation, which helps develop solutions to problems related to sustainability and development, is also collaborating on the Knowledge Hub.

Recently, Chawla and Solymos began a dialogue and collaboration about the project with the University of São Paolo, which sent a graduate student to iCeNSA in July.

According to Solymos, the goal is to help parents who want to do what’s best for their children but may not have the mechanisms to do so.

“There is not a single mother or father in the whole world who decides, ‘I am not going to feed my child well.’ This does not exist,” she said. “If a child is being fed in some way that is not adequate to meet his or her needs, there is something wrong. It’s either a question of lack of knowledge or a question of suffering.”

Originally published by Rowland, Ashley at conductorshare.nd.edu on August 23, 2018.