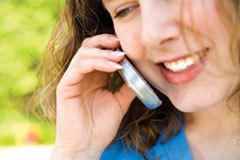 A project on the dynamics of social networks at the University of Notre Dame’s Interdisciplinary Center for Network Science and Applications (iCeNSA) has found a link between cell phone usage and relationship strength.

Toroczkai and his students worked on the modeling aspects while Chawla and his group focused mainly on data mining and prediction. Hachen and Lizardo both studied the number and frequency of calls and text messages to explore reciprocity, the way people respond to each other, and how it emerges over time.

“If I called you a lot and you didn’t call me a lot, that’s an imbalanced relationship,” Hachen said. “It turns out that’s extremely important. We now believe what’s really important in networks is not the formation of ties—which is important—but instead the persistence or the dissolution of ties.”

According to Hachen, social network research is unique because in addition to identifying ties between people, it also investigates how strong or weak those ties are.

The researchers used cell phone data—numerical information such as the number, frequency and timing of calls and texts—from 7 million people to form a picture of a social network. Neither the content of conversations nor any information such as phone numbers, which could have led to the identification of individuals, were used in the study.

That social network gave the group an idea of how many friends a caller has in addition to how many people the caller interacts with and the strength of those ties. Combined together, that information even enabled them to predict future behaviors.

To study relationship strength, researchers also looked at who initiated contact and how frequently it occurred, discovering that ties that are more reciprocal are more likely to remain intact. However, if there is an imbalance, ties will most likely dissolve.

Meaning, in social networks a person tends to connect with others who connect as much as they do. In physical networks such as air transportation systems, the networks must connect major hubs with many regional airports because connecting major hubs only to each other breaks the system.

A decade ago, most data came from interviews that required people to remember friends and provide subjective information. With technological advancements, researchers are now able to gather information about people’s actual behavior instead of the memories about their behavior.

Interviews, the previous method of information gathering, only revealed strong ties, as weak ties were not important to the subject. With the behavioral data now available, both ties can be studied.

The next step for the sociology group is to add another layer of data–attitudes, beliefs, and behaviors from surveys.

The team has also begun working on another cell phone project that will provide 250 Notre Dame freshmen with smart phones. The study aims to address questions such as whether ties influence people’s behavior or whether people choose to form ties based on existing similarities.

Engineers are also planning on collaborating with the researchers to help increase the quality of wireless networks around campus.

Originally published by Renee Hochstetler at news.nd.edu on July 15, 2011.