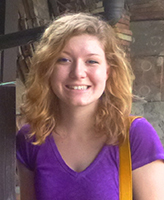 Notre Dame senior Margaret Pickard understands the challenges of integrating into a culture different from her own. The sociology and Japanese double major studied abroad last year in Nagoya, Japan, where she gained a fresh perspective on the difficulties of being a college student in a foreign setting.

“It made me realize that college itself is a very interesting point in life because you aren’t sure who you are yet, and when you study abroad, you add cultural differences on top of that,” she says. “It made me much more aware of the struggles international students have to go through here at Notre Dame.”

Pickard’s experience generated an idea for her senior thesis project. Bridging her interest in East Asian culture with her sociology major, she decided to research the integration process of East Asian students on the Notre Dame campus.

“My thesis studies the kinds of values students hold, how those values may be shaped by their Asian ethnicity, and how that affects their integration into a Western university,” she says.

Jessica Collett, an associate professor in the Department of Sociology, worked with Pickard to design a survey to disseminate to international students. She says that a senior thesis enhances a student’s undergraduate experience and “cultivates a different set of skills” than a traditional course.

“A thesis project like Margaret’s not only allows a student to engage with a specific topic of interest, but also introduces students to another side of academia. Students who complete a thesis get a real sense of what it means to do research for one’s job and the important role that research plays in teaching and academia in general. A thesis also allows students to work independently and one-on-one with an advisor or mentor.”

“Her research will offer insight on how to create a more inclusive and rewarding experience for international students, as well as enhance the entire Notre Dame community,” Collett says.

According to Pickard, the difficulty of this study—as with any sociological research—is trying to determine the root cause of human behaviors.

“The most challenging part is trying to attribute differences to just one theory,” she says. “I think human behavior is dependent on so many variables that you can never completely account for it. No matter how thorough I am with my thesis, I think there’s always going to be room for argument or a different theory.”

Pickard credits this aspect of her sociology major with helping her to be more open-minded and better prepared to adapt to different situations. 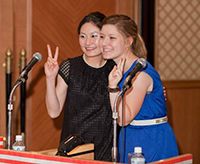 She began working at ICeNSA as a sophomore, on a research project examining the social ties that students create upon entering a university and how their social networks evolve over time.

“We distributed cellphones to 200 freshmen a few years ago and, with their permission, we’ve been following them ever since,” she says. “We’ve tracked their communication records and built models of their social networks as they change and as they go through college.”

This project not only helped prepare her for the independent research in her thesis project, but also caused her to reflect on the importance of students’ social networks as they adjust to college life, she says.

Following graduation, Pickard would like to return to Japan for a year. She hopes to participate in the Japan Exchange and Teaching (JET) program, which provides the opportunity to work as a language teacher in a Japanese school or international relations coordinator at a government office.

“I want to go back to Japan and improve on my Japanese while I’m still at this level,” Pickard says, “and build upon what I learned when I studied abroad.”

Originally published by Ben Horvath at al.nd.edu on March 27, 2014.